How big a home you can get? 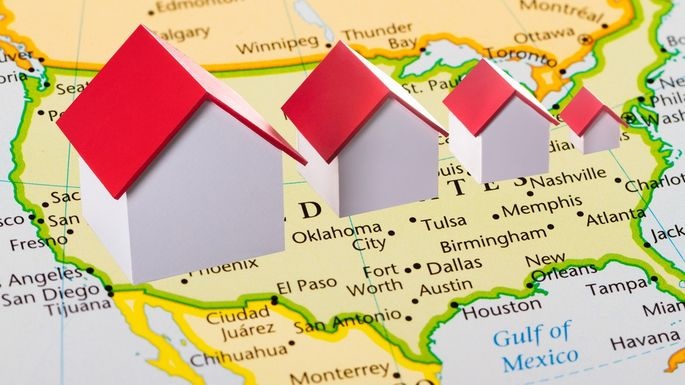 If you're hoping to buy a home, one of the main things you've likely obsessed over is how big a home you can get. Can you afford a four-bedroom, or barely stretch your budget to two? Have you saved up enough for a mammoth mansion, or will you need to squeeze into a shoebox-size studio instead?

Whether you can afford a small, medium, or extra-large home depends, of course, on how much cash and income you have on hand. But another critical factor is where you plan to live.

Because at some point in the search process, chances are better than even you'll find yourself muttering a variation on the classic bedraggled buyers refrain: "For the price of a [fill in home type] here, we could buy a [expletive deleted] luxury estate in [fill in lower-end town, city, or state]!"

To give you a sense of how much house your money can buy, the data team at realtor.com® chose a strategic selection of cities across the country and homed in not on their home prices, but a far more telling metric: price per square foot.

"Price per square foot is a good benchmark because it's a way to compare homes in an apples-to-apples way," says Andrew Chen, personal finance expert and founder of Hack Your Wealth.

On average, Americans pay $123 per square foot for a house, but that varies widely based on where you're looking to buy—a point made vividly clear in this choice sampling of cities with America's highest price per square foot (clocking in at over $1,000!), the lowest (a mere $42), and a few gems in the middle both in terms of price and geography.

"In general, price per square foot is higher in markets where there's high demand but land is scarce due to underlying geographic constraints," explains Robert Dietz, chief economist of the National Association of Home Builders. In other words, when people pack themselves onto a tiny island (e.g., Manhattan), price per square foot tends to shoot up.

Curious about where you can snag a lot of—or very little—home for your money? Here's how we crunched the numbers*:

We looked at the median price you'd pay per square foot for a home in the largest 100 cities nationwide.
As a benchmark, we assumed you'd pay the nationwide median list price for a home, which was $305,000 when the data was collected.
We calculated how many square feet that $305,000 would theoretically buy you in a sampling of 10 cities across the country—ranked here from most to least expensive.
Spoiler alert: In the priciest cities, $305,000 won't buy you much home at all. In fact, you'd be hard-pressed to find any property for that sum, unless you're willing to live in a tiny home (which clock in at around 100 to 400 square feet). But in other areas, you may be surprised by some of the places your money can buy.

So let's take a whirlwind home-shopping spree across the U.S.! Brace yourself for an eye-opening look at just how gigantic—or teeny—your house could be.

How Big a House Can You Afford? That Depends on Where You LiveTony Frenzel/realtor.com

House in Boston, MArealtor.com
Who would have thought that Boston would have bragging rights as America's priciest real estate per square foot?

Whether you dig the hyperintellectual vibe, the Red Sox, the cliquey New England iciness, or just those ivy-clad brick row houses the city is famous for, prepare to pony up close to a million for the privilege—or else settle for a "house" more the size of a granny pod instead.

Furthermore, the type of housing being built (mainly luxury single-family houses) has done little to ease Boston's growing pains (which would have been better alleviated with larger apartment buildings). Many municipalities place so many restrictions on multifamily housing that they effectively prohibit such homes from ever being built, according to a report from the Massachusetts Smart Growth Alliance.

Boston's housing shortage has gotten so ridiculous that Elias Papadopoulos, a broker at Re/Max Unlimited in Brookline, MA, worries that a tipping point might soon be reached where aspiring Bostonians head elsewhere.

"When the housing prices climb to a level where the possible income someone would earn is not enough to offset the housing, people will stop moving to the area," he says.

Nonetheless, deals can still be found if you know where to look. Boston real estate investor Jason Luongo of REISociety.com suggests home shopping in Mattapan (where the price per square foot is a more reasonable $305) or Hyde Park ($289).

Or join the commuters migrating to areas like West Roxbury, where you can buy a spacious bungalow like this 5,160-square-foot, two-bedroom above for $575,000 (or $485 per square foot).